Holistic healing works on cars, too

Holistic seems to be a buzzword that’s (over)used in medicine. From a medical diagnosis perspective, that word may cause you to roll your eyes, but not a bad way to think about automotive diagnostics. If you work on a counter, approaching repair holistically helps perform a miracle: you take more money from your customers AND they’re happy to have given it to you. Let’s approach this from the retail counter and the wholesale counter separately, because each has facets unique to the customers you serve from each spot.

Selling holistically at the front counter

It’s easy to see a big sale walk through the door, ring up the order, mentally count your commission, and go back to fronting and facing shelves or putting up the day’s truck order, but it doesn’t help you and in most cases it doesn’t help your customer. This is super-duper important if you’re adept at repairing vehicles. As an example, let’s think about a walk-in customer who might ask for a catalytic converter. At face value, this sale sounds great! It’s a juicy sale. But let’s step back for a minute and treat the car (and the customer, since they go together) holistically. Like a tummyache, the request for a cat may be a standalone problem or it may be indicative of something much deeper.

Vehicles are composed of complex systems, so repair is multifaceted and often more nuanced than some customers expect. Photo by Mike Apice.

I imagine it’s hard to be a doctor if you’re not a little chatty. They ask so many questions! Questions help when you’re slingin’ parts, too. Is our hypothetical customer asking for a manifold cat or an undercar cat? If it’s undercar, I might ask if it was stolen; that’s pretty common these days. But if this is a manifold cat, I can skip that question and ask a different one. “Ah, that stinks. What went south with yours?” Part of this, of course, is being friendly, but mostly I’m being nosy because I want to know why this thing went bad. I mean, the cat has one of the longest warranties of any part of the car. If this car’s not fairly old, right off the bat I’m going to bring up the fact that if this car truly needs emissions components, they could be under the manufacturer’s warranty.

But perhaps our walk-in is throwing a code. (It’s usually a P0420 or a P0421 cat efficiency code if they’re using a low-level, generic OBD II scan tool.) Is the customer aware of how those codes get set and how the system operates? It’s certainly possible a cat has just plumb worn out, but here are a few things off the top of my head that might be wrong that the converter in your hands can’t fix.

The oxygen sensors are reading too slowly Nobody treats lambda sensors as a maintenance item, but just like a spark plug, they degrade over time and slow down. It’s possible for them to slow down enough to set cat inefficiency codes but not set oxygen sensor DTCs.

Long term fuel trims are wonky Or the opposite could be happening. Maybe short term trims look fine, but the long term trims are running at a significant negative number. Maybe the car has had a leaking injector or two that’s been unresolved.

If any of those potential problems has gone on for a while, that new cat converter will only cure them for a little bit until they wipe out the new cat, and you’ll be the bad guy for selling “junk” parts. And if the problems are recent, like the intake manifold, fixing that issue may clean up the fuel trims setting the code. Manifold gaskets are way cheaper than converters.

Sometimes, parts coming back unfortunately happens before a sale is made. Walking a mile in the customer’s shoes pays dividends. Photo by Mike Apice.

Now, some of what I just wrote might be a bit over your head, or maybe not. It doesn’t matter either way, because if you ask your customer about fuel trims and lambda sensors, you’re either going to get some friendly chatter… or you’re gonna get a blank stare. If you get a blank stare, it’s a good time to mention that there are a bevy of parts that can set that code, and actually most of the time it isn’t the cat. Like a doc, your bedside manner matters here… you can politely let someone know that paying for a bit of diag time and the correct repair might actually be cheaper than the wrong DIY fix.

And if you’re still learning this biz? Start smaller. Selling holistically works on even the littlest of jobs. Did you sell a radiator to someone? Maybe they need the cap, or some hoses, or a couple fresh clamps to help make the job go easier. And certainly they’ll need a bit of coolant, right?

Selling holistically on the commercial counter

Paradoxically, selling on the back counter should be easier, since your customers ostensibly should not need you for diag assistance. But the volume of problems is much higher compared to the retail counter, and most aren’t piddly DIY jobs. When I was on a counter, the two biggest problems my customers faced were not being up to snuff on the existence of problems or the parts to repair them and then turning the bay over quickly once the vehicle was repaired. Holistic repair saved many days for me. Let’s start first with products. It was hard to keep up with product then, and it’s just getting harder now—every year there are new parts and vehicle complexity sure isn’t being reduced—and you still gotta have parts and knowledge about the old junk, too! Just like the retail tactics I mentioned earlier, being nosy (in a friendly way) and thinking through the whole job the tech is facing helps sell more stuff and keeps techs happy.

Let’s talk about knowing the products. I’m gonna use a Dorman piece for a moment here, our 927-100 sway bar repair kit. I sold and installed bundles of these things before I ever started working for Dorman. Whenever I’d examine one undercar, the dang OE ones were all rotten. Normally you replace just the end links, but on many FWD General Motors vehicles, cancer and rot would spread throughout the steel of the stabilizer bar itself. When So-and-so’s Auto Repair called me up for a set of sway bar links for a relevant vehicle, I’d ask if the links were off yet.

“Nope. Just calling to get a price for the estimate.”

I’d then ask the writer to have the tech to pull the link and examine the bar before selling the job. It only took a few minutes, and the service writer wouldn’t have to come back to the customer, hat in hand, asking for more money when the busted bar was finally found—and they had the added benefit of talking trash on the OEM stabilizer and explaining the one I was gonna send was solid steel, baby. I also didn’t have to burn another delivery driver with the repair kit, and I also didn’t have to write a credit for a set of sway bar links that would be coming back to me later in the week. (The repair kits come with links, because they’re obviously necessary to get the car off the lift.) 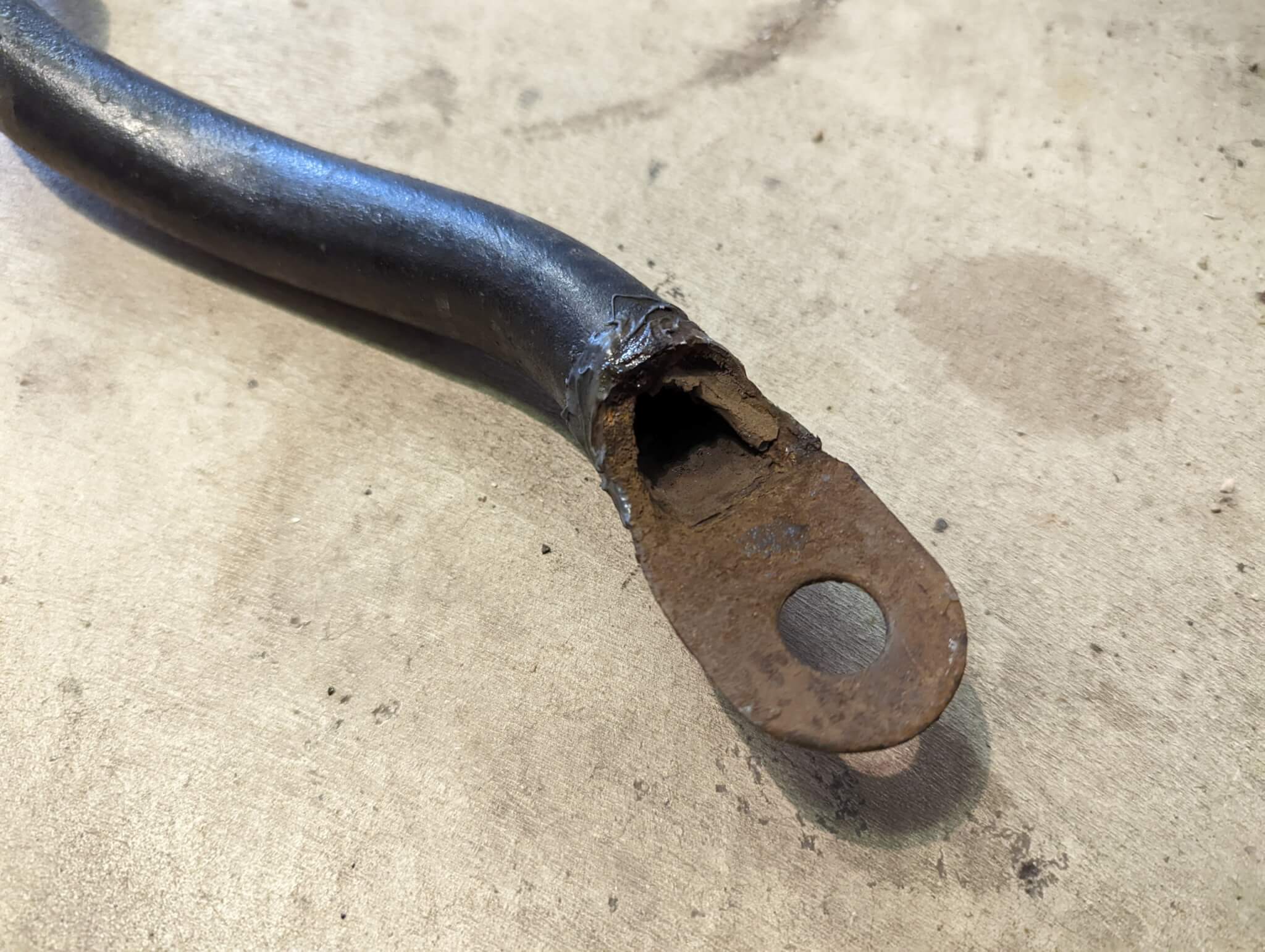 “How’d you know that was busted?” Photo by Lemmy.

Thinking through the jobs (and selfishly conserving my most precious of resources, my drivers) also led me to use some of my undercar experience to predict what parts would be needed. If you ever called my store and ordered brake drums or shoes and you had a charge account, you were getting a hardware kit, no two ways about it. Why? Up here in the North, unless a car is kept out of the rain and snow, the hardware is destroyed in there—and if it ain’t you’ll ruin half of it disassembling things. Maybe a quarter of the ones I sent out got sent back. Most techs realized the OEM parts were tired, and the few dollars the kit cost could be hidden easily in the estimate somewhere.

Coming back to catalytic converters, I might not bother asking a tech why (that would be pretty bad form with a good mechanic), but I sure might ask about selling some lambda sensors with one. The old ones are often hard coming out, and who really feels confident putting an old oxygen sensor into a new cat?

Just taking a minute and thinking about you customer’s problems and solutions and path to getting there might increase your ticket averages and put big ol’ smiles on a lot of faces.

Maybe this whole “holistic” thing is more than a buzzword, eh?