Before asphalt, automotive pioneers used the beach as their racetrack

If your idea of Jersey beach towns comes from “Jersey Shore,” Cape May is not that. As opposed to the ride-filled boardwalks of Ocean City or Wildwood or the casinos of Atlantic City, Cape May is a much more laid back, family-oriented shore destination. I recently took a vacation there and didn’t even realize that Cape May was the location of some rather historic auto races on the beach one summer, featuring none other than Henry Ford and Louis Chevrolet. 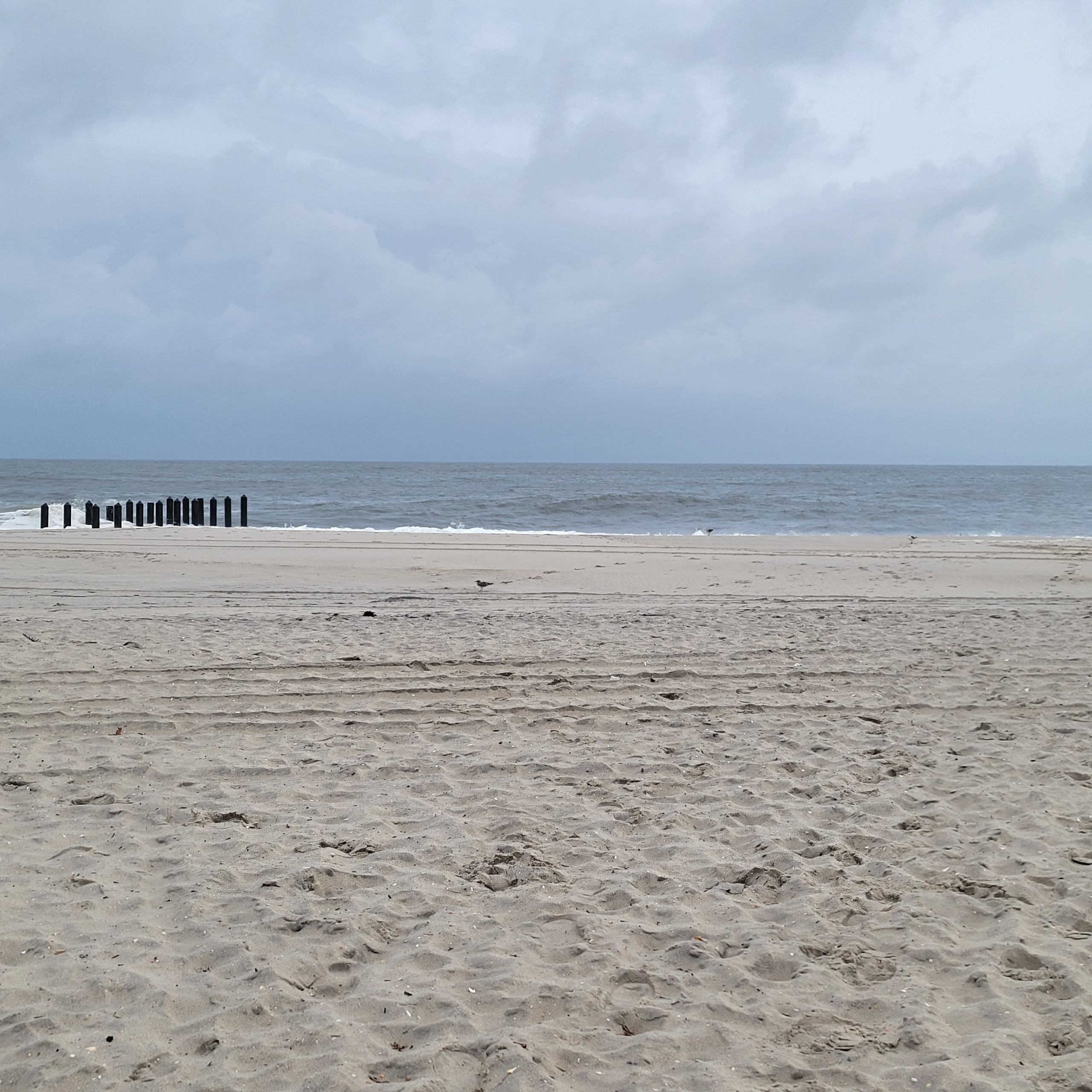 I didn’t know it when I took this photo, but Ford and Chevrolet once raced on this very stretch of beach! Photo by Jonathan Roth.

Beach vacationers have been visiting Cape May since at least the early 1800s, leading the city to bill itself as “America’s Original Seaside Resort.” By the early 1900s, Cape May was a flourishing shore destination. By that time, of course, the horseless carriage was becoming more and more prevalent, opening the prospect of a seaside vacation up to those who previously might not have been able to access a resort on the sea. Americans were crazy for competition in then-nascent motorsports, but asphalt was not yet common, horse racetracks had to be heavily modified to allow cars to race on them, and groomed race surfaces (such as board track and velodromes) cost a ton of money. However, beaches seemed ready-made for such events. Beaches, like automobiles, were typically the domain of the very rich, and the smooth surface and relative lack of structures reduced risk for racers and landowners. In addition, the resort towns were built to accommodate temporary large influxes of beachgoers. This led to early races being held on the hard-packed sand of the beach of Ormond, Florida, with the first race being held there in 1903. Lesser known are the races held only two years later on Cape May’s beach.

In early 1905, a group of auto owners in Cape May formed the Cape May Automobile Club. They quickly set about scheduling a series of races for that year on Cape May’s beach, believing that their beach was perfect for racing, perhaps second only to Ormond’s beach. They scheduled timed races for July 29, August 25, and August 26 of that year. For race location, they reportedly chose a roughly two-mile stretch of beach between where the Life Saving Station was then (a little east of Madison Avenue) and Poverty Beach on Sewell Point. These approximate locations are indicated by the blue pins on the map below. The prizes included a Cape May Trophy and a Kilometer Cup Trophy, to be awarded to the best time on the kilometer course.

J. Walter Christie, engineer and inventor, was invited by the Cape May Automobile Club to race on this newly christened Cape May Speedway. Christie had just driven his car on the Ormond beach, driving a mile in the then-staggering time of 40 seconds at about 90 miles per hour, setting a record for fastest mile in an American-built car. Reportedly, since that time, he had increased the power in his car and looked to the Cape May race to break his own record. (Christie would later go on to develop the Christie suspension system, used in several World War II-era tank designs.)

Christie was set to race on July 29 of that year, but rain forced rescheduling to the following day. His 8 cylinder, 180-horsepower “Blue Flyer” was clocked at 25 seconds flat (89.28 mph), setting a new kilometer record, proving the car was no fluke.

Christie also challenged Henry Ford to race him on Cape May’s beach and Ford accepted. Then, Louis Chevrolet announced he would also participate in the race, driving his 120-horsepower Fiat. Thus, the August 25 and 26, 1905 races billed Christie, Ford, Chevrolet and the then-famous racer A.L. Campbell. 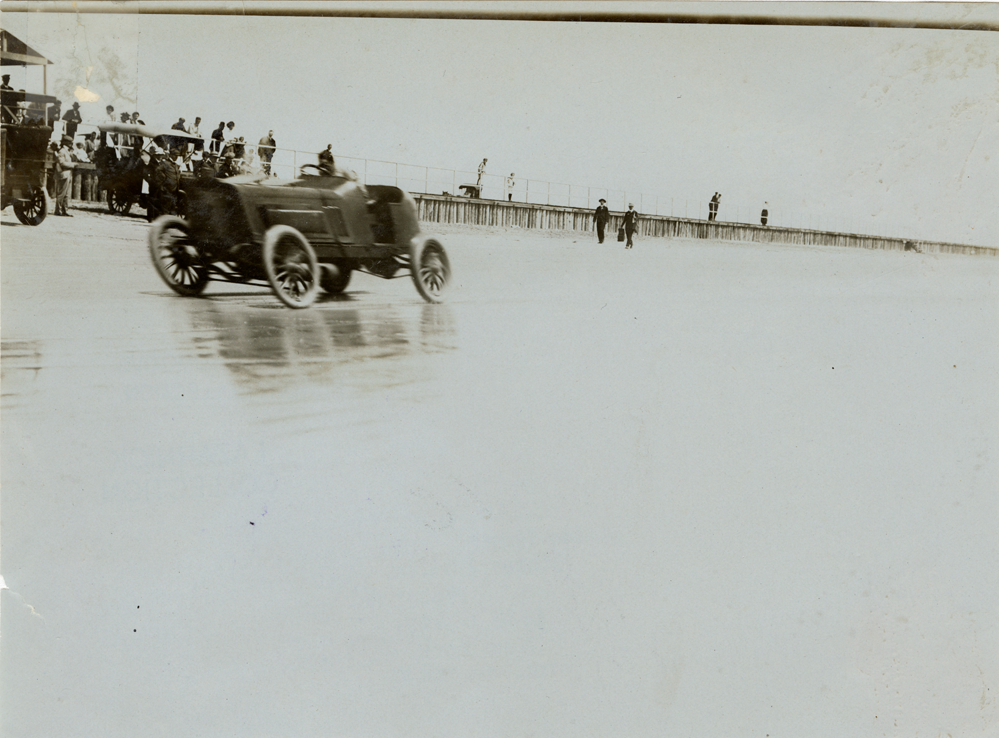 Unfortunately, the races on August 25 were marred by rain and difficulties with the racecars and many of the events were postponed to the next day, including the races between the four headliners. Despite more bad weather the next day, the Cape May Automobile Club decided to press on with the races so as to not disappoint the 20,000 spectators that had assembled. On that day, Mrs. C.C. Fitler raced her 1905 Packard Model N in a women’s event to a speed of 49.31 mph, setting a new record for her category. Although the beach conditions weren’t ideal, the racers still did their best to wow the large crowd. If you really want to put your mental toes in the sand with the other race attendees, the Detroit Public Library has a collection of photos from the 1905 Cape May beach races, which can be found here. 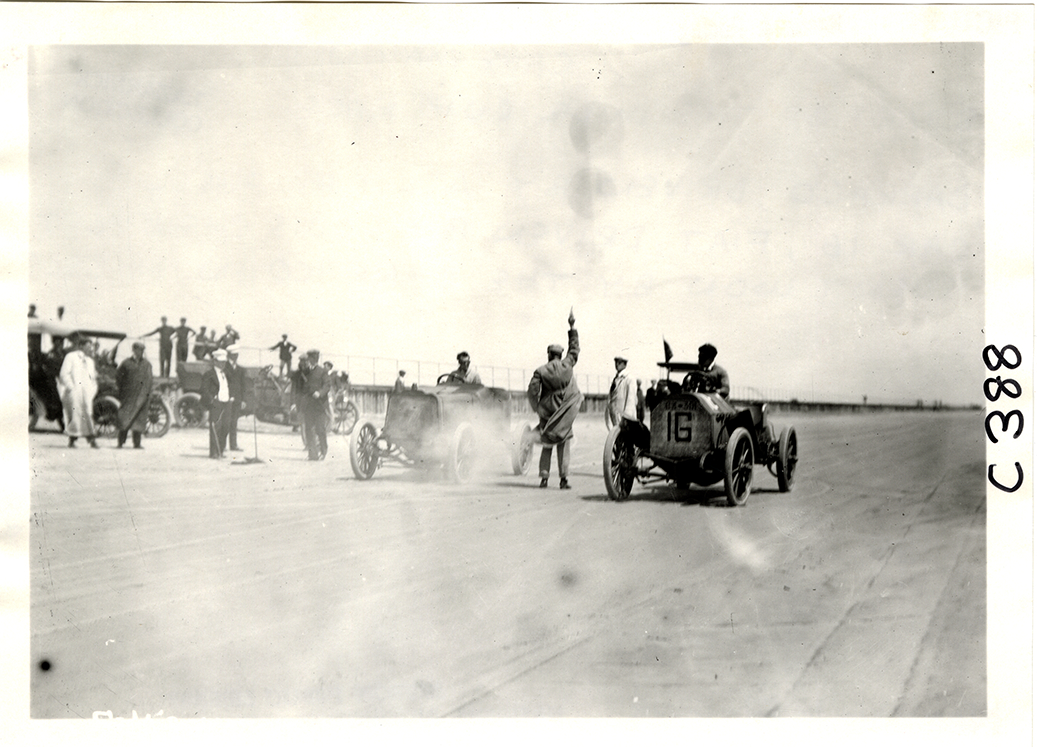 Unfortunately, Ford had a bad showing due to car troubles. This put him in a tight spot financially since he was counting on winning prize money at the races to pay for this stay at Cape May. As such, he was forced to sell his touring car (a Model F, NOT his racecar!) to Dan Focer, an engineer on the Reading Railroad, in order to pay his hotel bill. The deal included a promise from Ford that he would give Focer the nation’s first Ford dealership. Ford did make good on the promise, awarding Focer the nation’s first Ford dealership in 1908. 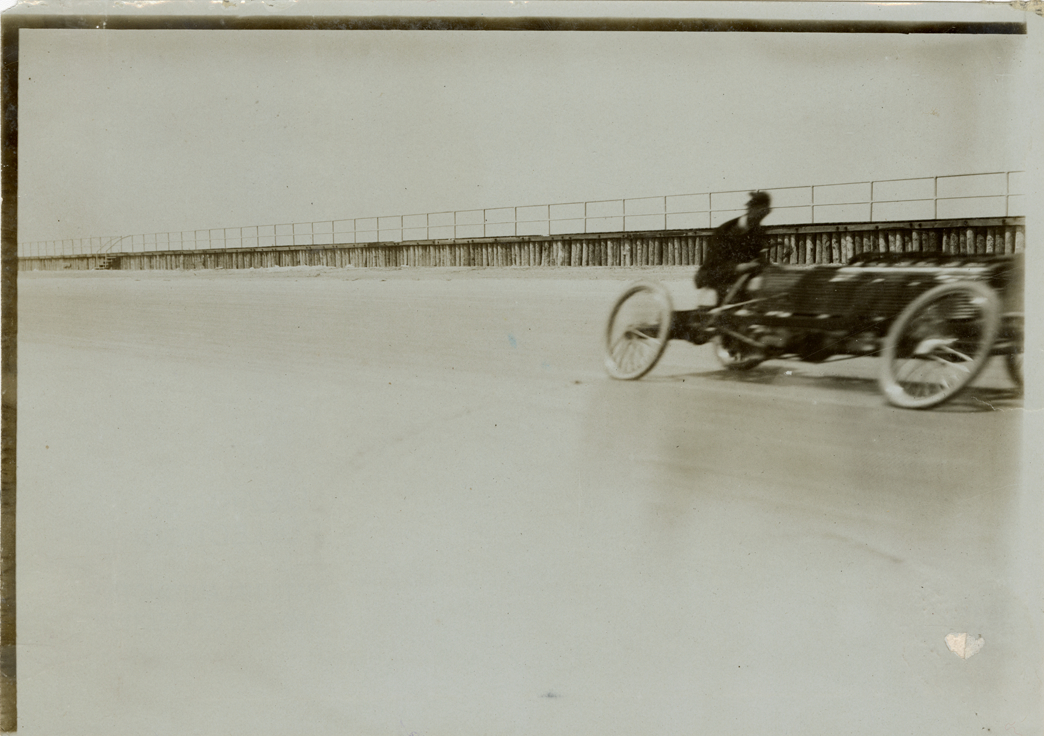 Unfortunately, there is no record of races on Cape May beaches after 1905. Had races continued, Cape May might today be as well known as Ormond, Florida as a birthplace of auto racing. However, the legacy of beach racing in Cape May and New Jersey is honored today by The Race of Gentleman, held annually in Wildwood, New Jersey, less than 10 miles northeast of Cape May. 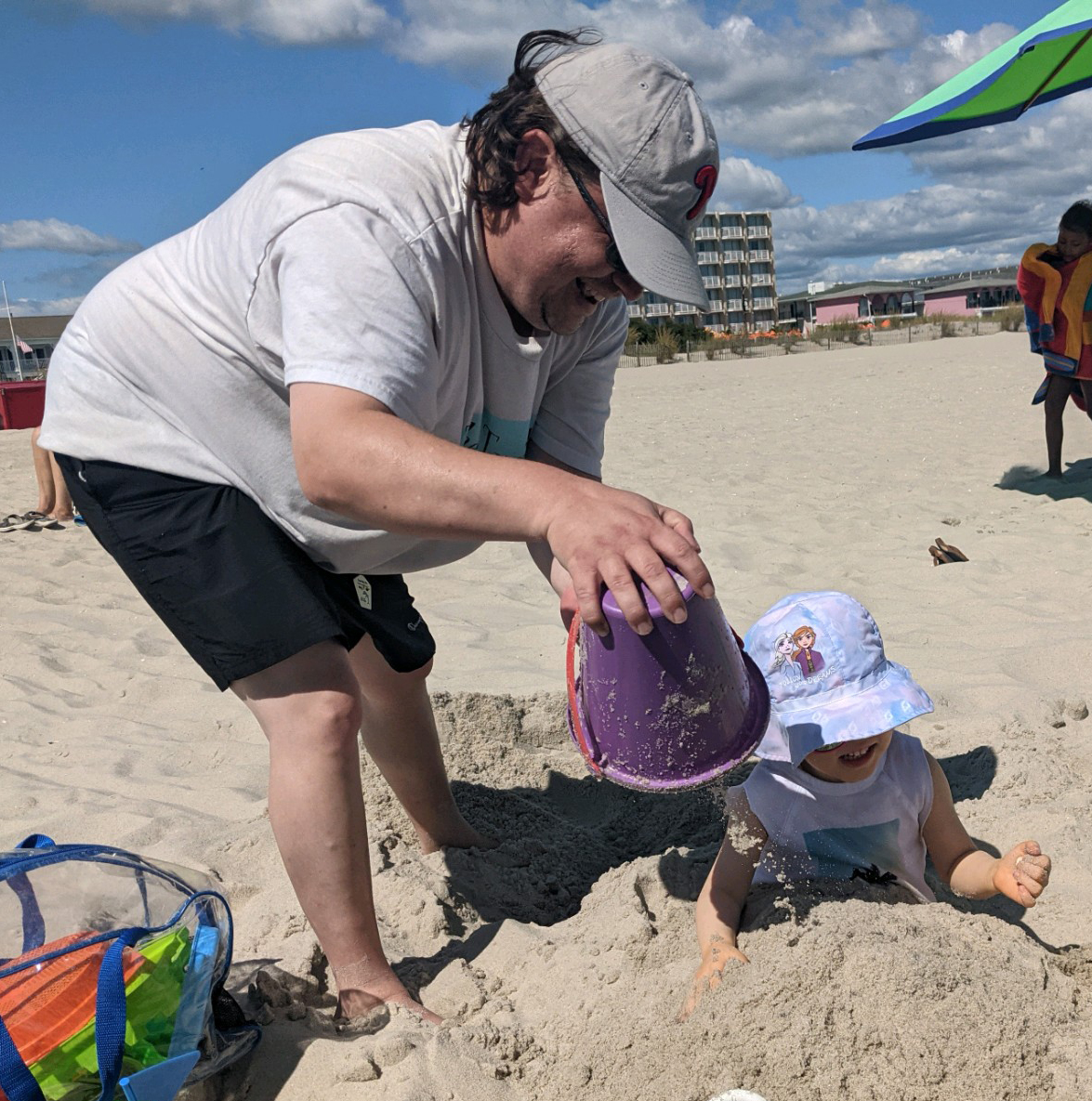 Burying my daughter in the sand where Ford and Chevrolet once raced. There were probably parents and children just like us 115 years ago on this beach who were excited to see this exhibition of new and powerful transportation that was transforming many aspects of American life at breakneck pace. Photo by Laura Roth.

The automobile has altered the country forever such that even when I’m relaxing and getting away from my job in the automotive industry, I can’t get too far. And when I’m back in Cape May next summer, I’ll know that I’m relaxing on a beach where Henry Ford and Louis Chevrolet once raced. 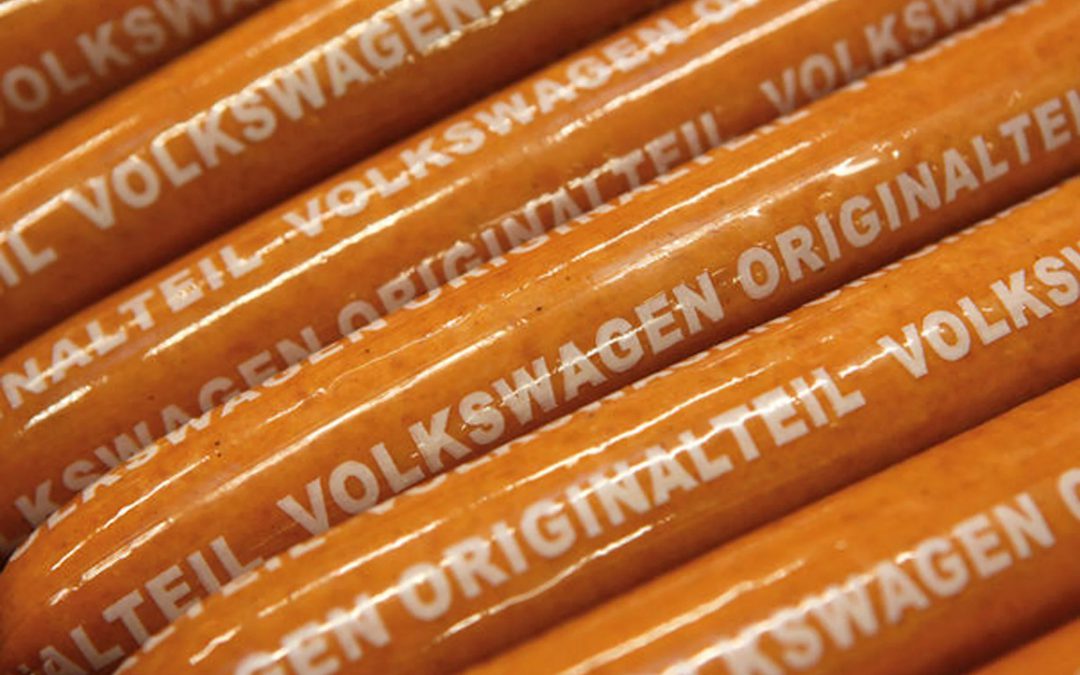 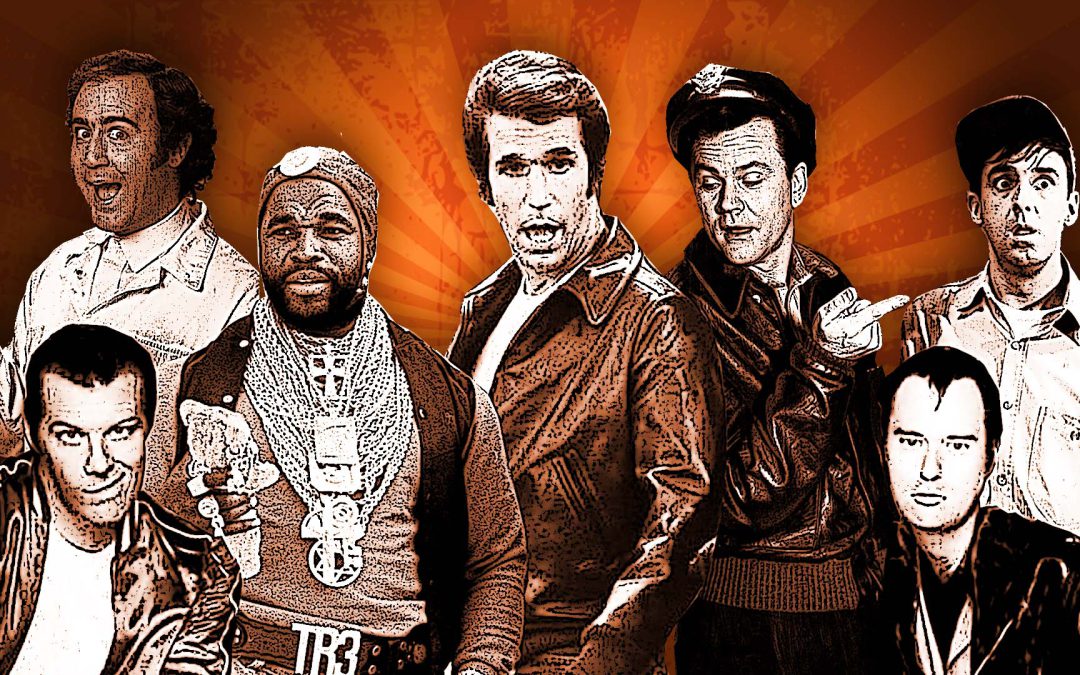