Choosing the right oil filter’s more complicated than you think

In my first job behind the automotive counter, I remember selling an awful lot of 10W30, 10W40, and even some of that newfangled 5W30.

Now, of course, things are much different; we have many weights of oil, most trending toward lower viscosity, and more and more vehicles specify synthetic oil, partially due to consumer demand for longer service intervals. Most customers won’t bat an eye at a fully synthetic oil that costs ten bucks a quart if the car requires it. But how many people who walk up to your counter quiz you about the filter? 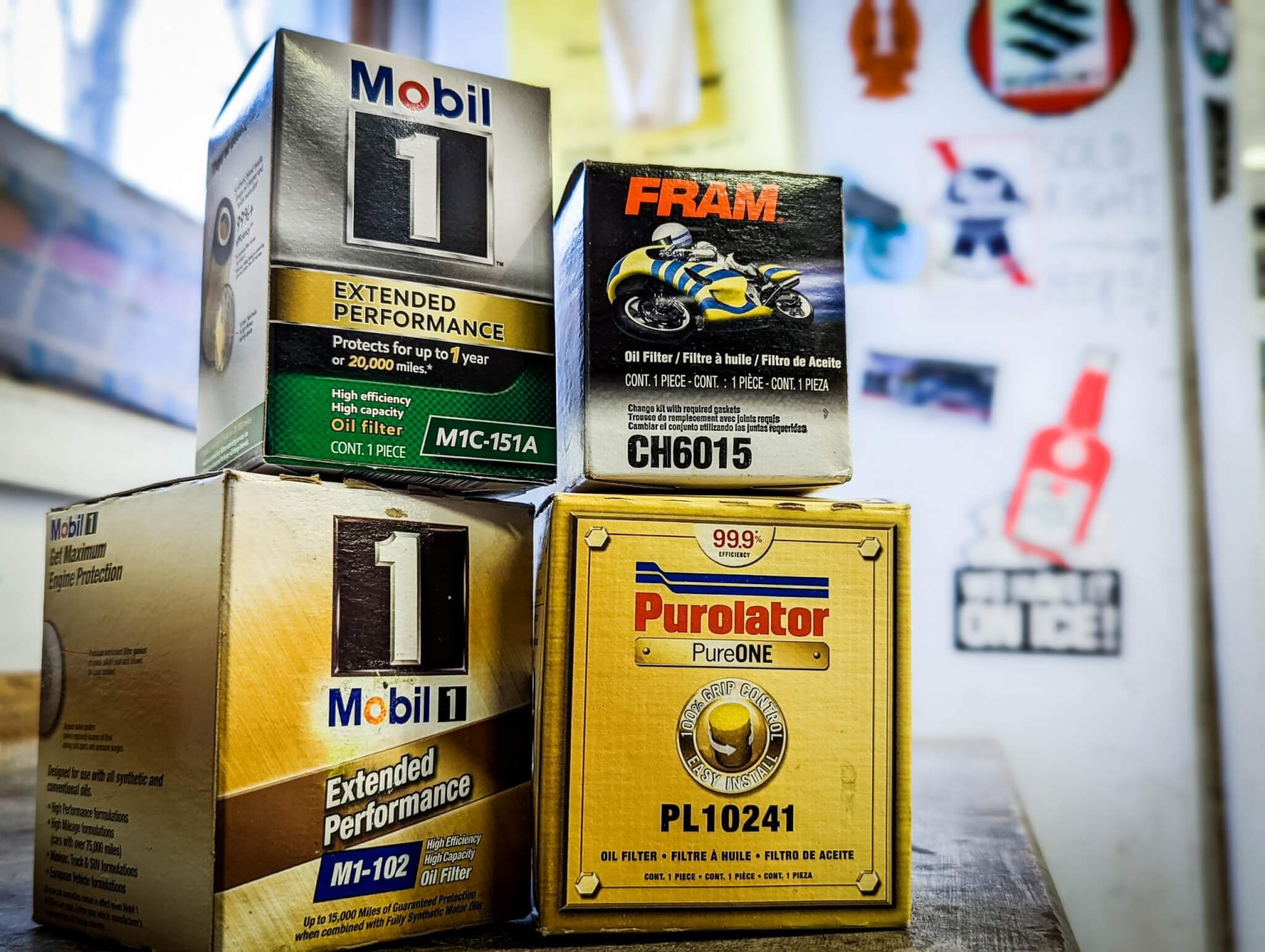 Oil filters, like engine oil itself, are not all created equal. Photo by Lemmy.

If you aren’t a counterman but instead work in a shop, you probably stock one brand of filter, and I’m betting it’s likely an economy filter. Vehicles and lubricants have both changed a lot over the years. Installing an old-fashioned filter on a modern vehicle because that’s what’s in stock may not the best course of action.

Whether a spin-on or cartridge style, the heart of the filter is the media. Automotive oil filters generally have a filtration media that falls into one of three camps: cellulose (paper), synthetic, or mixed fiber media, which is a blend of both types. Paper media is simply not as resistant to aging (weakening) as a properly chosen synthetic media. This matters a great deal on today’s vehicles that may spec really extreme oil change intervals. (Jaguar is up to 15,000 mile intervals on their vehicles!) Do you really want to pair up oil that can go that interval with a cardboard or paper filter that was originally designed for a then-standard 3,000 mile change?

Compounding this issue is ethanol fuel, which represents a significant portion of the gasoline sold in the United States. Ethanol generates more water as a byproduct of the combustion process. That water mixes with the engine oil and passes through the filter media until the oil has gotten hot enough to drive the water off.

Water weakens paper filter media to the point of being able to tear, reducing its efficacy as a filter and shortening its effective life. In extreme cases, pieces of media can actually detach from the filter and circulate within the oiling system. It’s also a bit less tolerant of higher temperatures. Quite a few modern vehicles are now packing turbos under the hood—more and more mundane vehicles are relying on forced induction, and turbos spin pretty fast. Higher temperatures and speeds mean clean oil is more critical than ever in these applications.

Remember, too, that many modern vehicles have stop-start systems. Synthetic filters can not only filter smaller particles but can often offer more consistent pressures while doing so. (This is why oil filters are generally a little smaller than they used to be. When was the last time you poured a quart of oil into a modern vehicle’s oil filter?) Media that has clogged and created higher-than-normal pressures will open the bypass valve, sending dirty oil that’s bypassed the filter media back into service. This obviously is compounded with a stop-start vehicle. Further, if a stop-start is pressed into stop-and-go traffic immediately, achieving proper operating temperature takes longer than if the car remained running. This exacerbates that water-in-the-oil problem we already covered.

Let’s also not forget about the myriad of systems that run off oil now, like variable valve timing and multiple displacement systems; do you really want filter media coming loose with that componentry? Sludge or dirty oil are ultra-problematic for vehicles with this fairly advanced technology. Even the move to overhead cams has dictated much longer timing chains than the days of cam-in-block motors. Experienced techs know that timing chains don’t stretch, they actually wear as the fit between pins and links gets sloppier. Poorly filtered oil  accelerates that wear greatly.

A quality filter goes beyond the media, however. Generally, a manufacturer using a high-quality filtration media is also going to use a premium gasket, bypass valve spring, and anti-drainback valve, too. Building a better oil filter costs money, but that money is amortized in many cases by the savings on reduced service. Educating your customer (and being aware of the differences yourself) can help you have a customer feel confident in the parts you’re installing—especially if those parts need to last longer than they ever have before.