Almost 80 years ago, the United States Office of Strategic Services, which eventually became the CIA, created a pamphlet to help people living in Nazi-occupied countries discretely undermine the enemy. This Simple Sabotage Field Manual was published in 1944 and finally declassified in 2008, and it outlines a fascinating strategy for encouraging everyday people to fight back in subtle ways.

“Acts of simple sabotage are occurring throughout Europe,” the introduction reads. “An effort should be made to add to their efficiency, lessen their detectability, and increase their number. Acts of simple sabotage, multiplied by thousands of citizen-saboteurs, can be an effective weapon against the enemy. Slashing tires, draining fuel tanks, starting fires, starting arguments, acting stupidly, short-circuiting electric systems, abrading machine parts will waste materials, man-power, and time. Occurring on a wide scale, simple sabotage will be a constant and tangible drag on the war effort of the enemy.” 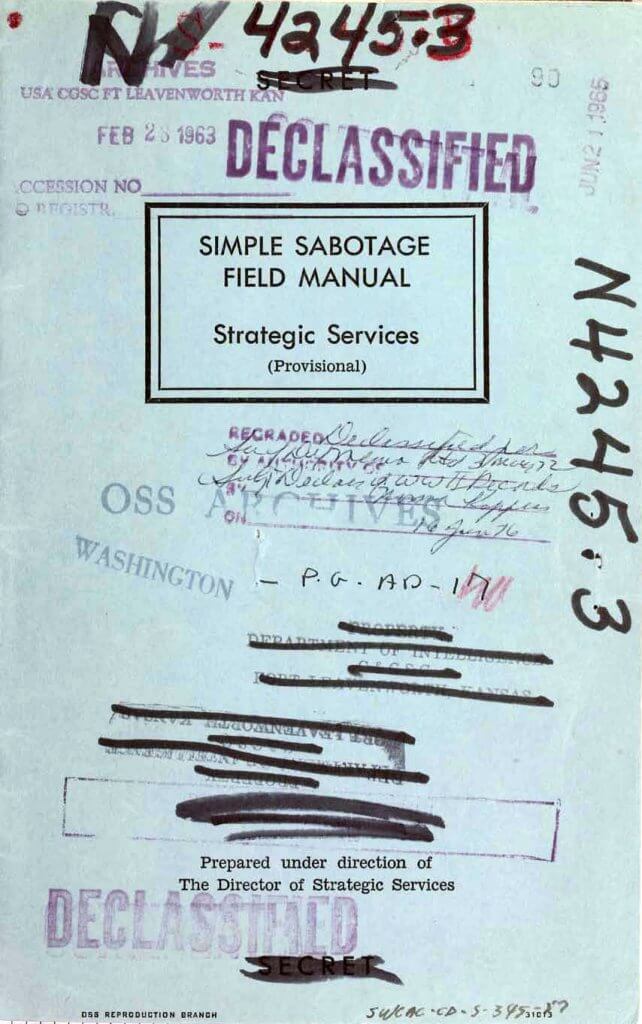 Cover of a copy of the manual. From Wikimedia Commons.

From there, it provides creative ideas for rewiring the way you think to maximize inefficiency. Because it’s often hard to actively think about the wrong way to do things, it provides all kinds of tips and techniques. Some can be employed by anyone in everyday life, like prank calling military offices, while others are specific to people working in certain industries, like drawbridge operators acting slowly to jam up boat and vehicle traffic. Many tips are related to machinery and transportation, since both are critical to a war effort, then and now.

Unfortunately, much of this is still highly relevant today. Russia is currently invading Ukraine, despite untold numbers of Russians opposing the war, leaving millions of Ukrainians facing the threat of Russian occupation. Reports of poor Russian truck performance underscore how much of a difference proper maintenance can make in a situation like this.

But even if you aren’t in a position to impact a conflict, many people have since pointed out that thinking about the wrong ways to do something is actually a brilliant way to reverse engineer the right way to do things. In that way, some of these worst practices might actually be insightful, whoever or wherever you are.

Here are some of our favorite acts of sabotage from the manual that are especially relevant to auto repair and general shop operation. All of these are direct quotes from the official government publication itself, some of which you can tell were written in the ‘40s, while others seem like they could’ve been written yesterday. By reading some of these descriptions of how to be mechanic-saboteurs, you could be inspired to be a better tech.