My career started with tire repairs, and I bet yours did, too.

Depending on how many years ago that was, you may have been patching tires, plugging tires, or patch-plugging. I recall being told solemnly by my manager that I was never to plug a tire because it was dangerous. I held my tongue, but as the title of this piece no doubt tipped you off, my opinion now is the same as it was then. Pluggin’ a tire from the outside-in is just fine. We’ll get to why in a second.

Some of you are shaking your heads because I wrote something that flies in the face of what you’ve been told for a long, long time. Consider a few of the other guidelines: no repairs outside the tread grooves. Always inspect the tire liner. And several manufacturers consider a repaired tire to have a reduced or even nullified speed rating. 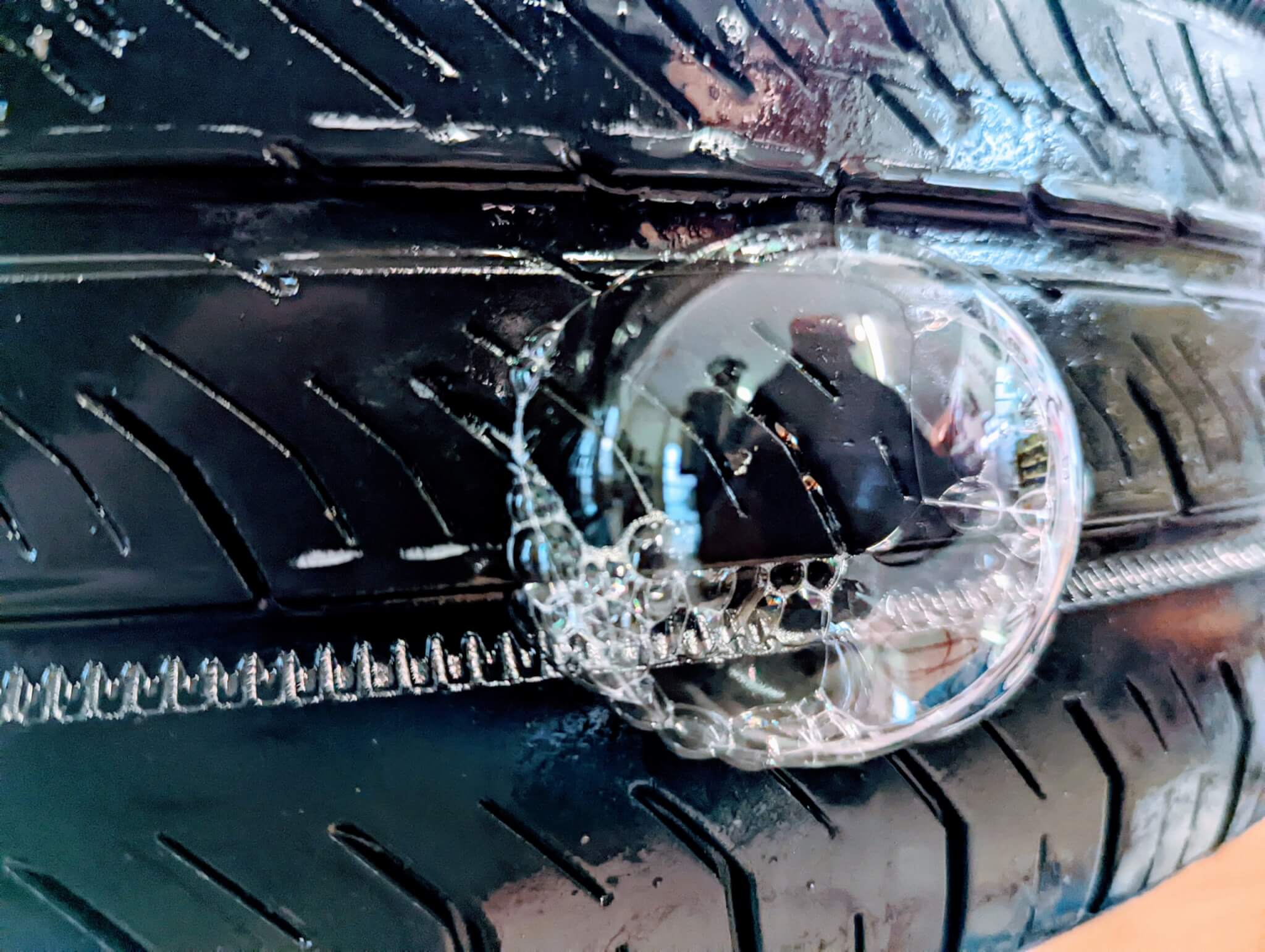 This tire is in obvious need of repair, and I think there are a few ways to skin that cat. In the case of this particular tire with 3/32″ of tread left on it, the tire won’t be in service long enough for belt separation to be a realistic issue. Photo by Lemmy.

And all of these rules have always been promulgated by groups like the RMA (now the U.S. Tire Manufacturers Association). It does seem to me that an abundance of care would benefit them through either increased tire sales (“Sorry, that repair isn’t within the repairable zone”) or, barring that, having a damaged tire brought to a shop that presumably also (begrudgingly) repairs tires. (“You can’t repair it without dismounting!”)

The argument against patches is that the tire’s steel belts are now exposed to water and salt by way of the path the offending item took into the tire, and will eventually separate, leading to a violent blowout. The argument against plugs is that they don’t seal the liner. My argument for any of these repairs is that every one I have performed has never failed, and I have done a ton of ‘em on personal vehicles and way more customer cars. (In fairness, I have never patched anything besides a tube. If I’m inside a tire, it’s getting a patch-plug.) If someone can explain to me how a patch-plug does a better job of keeping moisture and contaminants out of the tire than just the plug, I’m all ears. 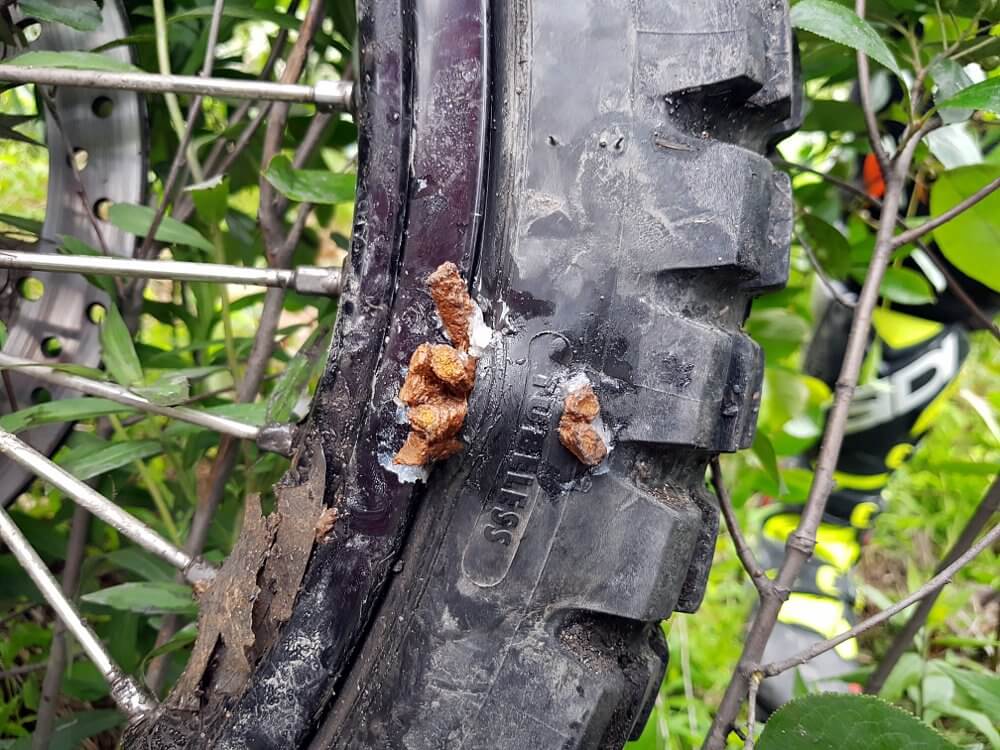 This is a completely inappropriate tire repair—but it kept the tire in service for a little longer at low speeds. Let’s just not forget most repairs aren’t a binary right or wrong, but rather fall somewhere along a spectrum of appropriate to inappropriate. Photo by Lemmy

Sure, there could be damage inside. And yeah, I’ve stuffed a string plug in spots outside the “repairable area.” But I also don’t run out for a trackday on my beater commuter after I have done it. They’ve worked fine on wheelbarrows, motorcycles, cars, mowers, tractors, trucks, and trailers. Heck, I think it’s easier and quicker to plug a tire roadside than it is to swap to the spare tire and wheel. And let’s also not forget string plugs were the most common tire shop repair for many, many years, and it was considered a permanent repair. (At least one tire repair kit manufacturer seems to agree that string plugs can be considered a permanent repair.)

Nightmare stories about improper tire repairs exist. However, if some of the major tire manufacturers remove speed ratings from tires repaired using any method, it sounds like at least some of them consider a “properly” repaired tire unsuitable to be returned to service. Perhaps ANY tire repair is incorrect, then, if a vehicle is to be shod with tires of a certain speed rating. And what about other damage? I’ve certainly seen some tires that have taken wicked curbshots or potholes. That can’t be great for the liner or sidewall, but do we have people running out to replace tires when that happens?

In many areas with vehicle inspection, tires are almost certainly on the list of items to be checked over. I’ve never seen a state that would fail a vehicle for having a tire plug—if they’re not safe, wouldn’t that be part of a basic vehicle safety check? The Commonwealth of Virginia even mentions plugs, specifically stating that a plug that’s been installed in the conventional repair area should not be rejected.

I’m certainly not opposed to the patch or patch-plug. I just think the plug has been villainized because… well, because the enemy of a tire sale is a plug, and most folks aren’t gonna dismount a tire to repair one at home. I think litigation (or the threat thereof) has driven tire plugging the way of the dodo bird. I wouldn’t stuff one in a customer’s tire. I wouldn’t encourage you to do that, either. But for my own stuff? Sure, why not? And for that reason alone, I’d say the tire plug isn’t done just yet.