Want to get kids interested in trades? Start with their school science fair.

While their interest in learning a skilled trade continues its precipitous decline, American youth and young adults seemingly cannot break eye contact with their phone screens.  Coincidence? I think not, and humbly offer all parents a suggestion to help alter the course of history just a little bit: Get your kid excited about the school science fair. 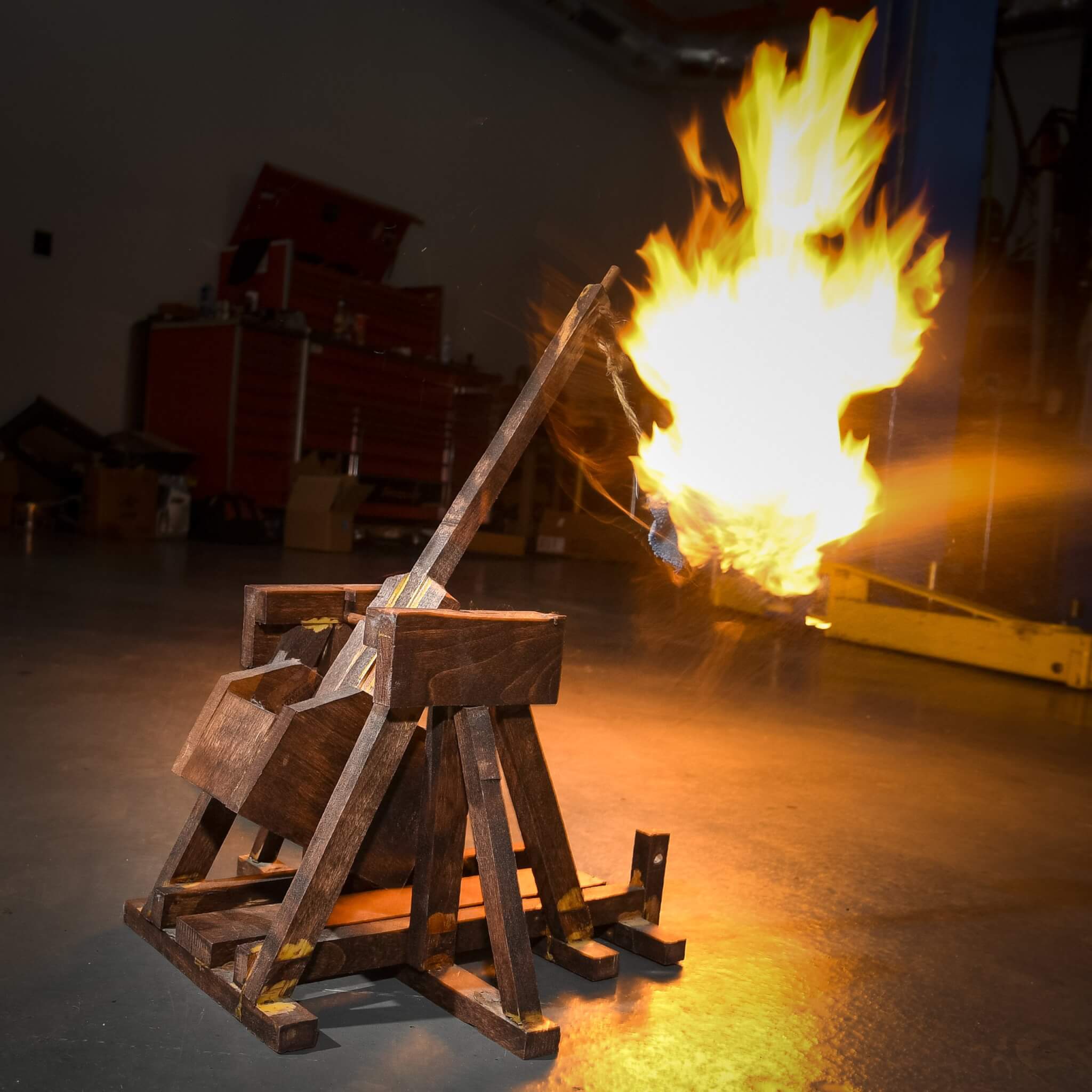 Flaming balls? Check. Medieval weaponry? Check. Workshop environment? Check. There are a lot of ingredients here to get a kid off the couch and into the shop. Photo by Mike Apice.

What does get old is how the alleged skillz exhibited on social media platforms seem to rate higher and in too many cases pay better than real skills. I’ve seen how much effort it takes for my daughter to conceive, create, shoot, and post videos. It’s roughly equivalent to the time and talent required to check her car’s oil level, something she never does since inheriting from my wife an inexplicable disregard for automobiles.

Call me a curmudgeon (get in line) but I see this increasingly common time-suck as yet another damaging kick of the proverbial can down the road of American youth’s continuing, decades-old decline in wanting to learn a trade. Any trade. If you’ve tried to hire a service tech for your shop or a plumber for your home lately, you don’t need me to belabor that topic here. The shortage of craftspeople in every economic sector has and will continue to cost us both personally and as a nation.

But the digital world is the world now and like the good ol’ analog days that preceded it, it’s filled with distractions that threaten productivity. The big—make that huge—difference between then and now, however, is the degree and indiscriminate cultural and economic impact of digital distractions. It’s hard to argue that the easier it is to access answers to our questions, the harder it becomes to develop and grow critical thinking skills of our own. Decades ago I learned how to replace the thermostat on my hammered Wrangler because (a.) I had no money, and (b.) I needed that craptastic AMC Jeep to run if I wanted to get a date. From that stumbling, fumbling first cooling system repair on, I knew I’d never again fear the cost of coming home from off-roading with a hole punched in my radiator.

In contrast, when I searched for a five-minute video to learn how to use the self-parking feature on my new Explorer, twenty additional minutes of my life disappeared while I cackled through clips of epic parking fails. Productive use of my time? Nope. Critical thinking skills gained? Nada, nyet, zip.

Sitting on your butt staring at a digital display to learn how to use a vehicle that parks itself using a digital display, thus never learning the necessary skills (e.g., spatial geometry, simultaneously steering/gear shifting, etc.) to park said vehicle yourself.

If You Build It, They Will Come (Maybe)

I’ve never met a single service tech or dedicated DIYer who didn’t possess the solid critical thinking skills that are essential to any trade, and I make no apologies for declaring this here in Shop Press or anywhere else: Producing and/or repairing complex engineered products (and cars and trucks are exactly that) isn’t just a great way to make a living. There’s a nobility to the endeavor and in gaining the trade skills required to be successful in it. The satisfaction derived from it is unrivaled by any other profession. Period.

The school science fair can help more youngsters experience that satisfaction, often for the first time. During my years as the owner of a large-ish machine shop, I heard from a lot of frustrated fellow parents who lamented that their kids found the virtual world of video games and smartphones much more engaging than, say, building a tree house or a go-kart. Many of those parents pleaded for help. If you’re like them and your kids are at a formative age, lean in.

Perhaps merely hearing the words “science fair” conjures painful childhood memories of posterboard-borne experiments gone horribly awry for all to see. It might drag you kicking and screaming back to memories of your old school auditorium overflowing with elegant working models of crystal radios, photosynthesis demonstrations that God Himself would envy, and erupting miniature volcanoes. Oh, and let’s not forget at least one obligatory, expertly home-built, copper-wound, hair-raising Van de Graaf electrical generator that produced more “oohs” and “aahs” than an episode of Oprah.

Fear not. Events like these offer a golden opportunity to inspire your preteen or teenage couch-potato kid to become the next Henry Ford or Elon Musk. The school science fair or any other good-natured scholastic competition that requires your kid to conceive, plan, create, measure and ultimately be responsible for the outcome of a product is a valuable teachable moment. In fact, prepping for a science fair is nothing if not exactly the kind of positive exposure to trade skills our country’s youth need now more than ever. Grab it and ride it for all it’s worth. You might be amazed at the impact it has on your child.

Case Study: The Fire to Inspire

When my then-7th-grade son was steeling himself some years back for his first experience with his middle school’s annual science fair, this conversation ensued.

Son: Dad, I need to decide what I’m going to do for the school science fair.

Me: What do you have in mind?

Son: Well, kids are testing batteries, the effects of saltwater on different metals, that kinda stuff.

Me: Totally lame. What are you gonna prove about a double-A battery that a bazillion kids don’t already know? And what happens to metals when they’re exposed to saltwater?

Son: They rust. Or they don’t.

I gradually steered him toward combining his career interest— engineering— and his typical 12-year-old’s fascination with anything that explodes, burns, or generally scares the hell out of responsible adults. The result? He built two working models of medieval-era siege weapons, test-fired them at a scale-matching Styrofoam block “castle” wall, gauged the “destruction” each firing caused by measuring the aggregate distances between the blocks, and recorded and reported the results.  In other words, he planned and executed a product development cycle in a way that’s not all that different than what we do here at Dorman. Unlike what we do at Dorman, we shamelessly mugged for selfies through every step of the process. 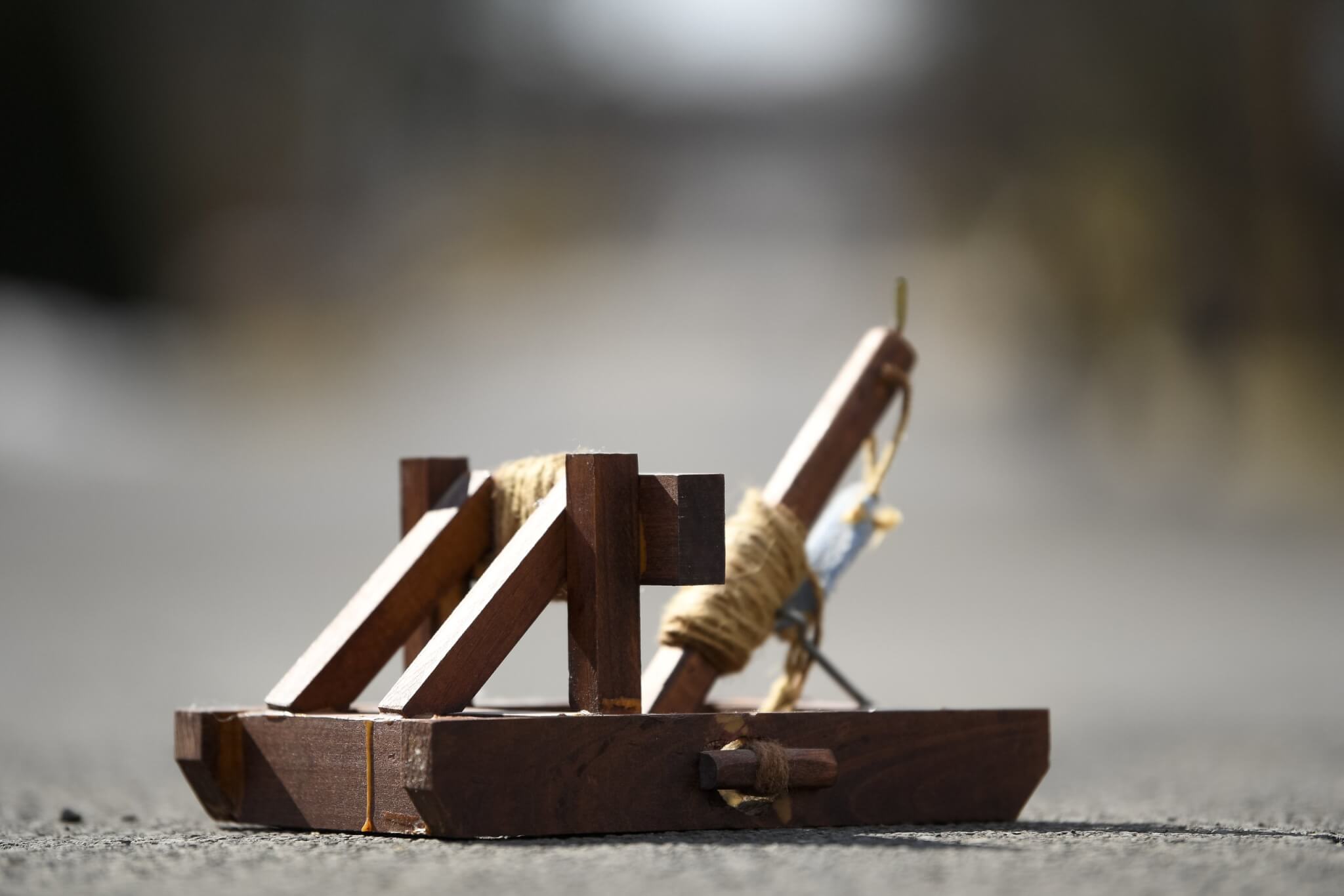 This one doesn’t work as well, so no flames for the catapult. Photo by Mike Apice

Granted, there wasn’t and still isn’t much of a market for catapults and trebuchets these days, but this was for a science fair. I figured when his school held a marketing fair, we’d deal with that subject. At the time, though, D.J. was totally pumped about the chance to build something, and I was pretty darned proud that I was able to inspire that excitement merely by guiding the process and helping him learn how to use some power and hand tools without resulting in a trip to the emergency room. And we had a blast firing miniature “boulders” at his scale-model castle wall.

Did he pull it off? Absolutely—he crushed it. Would he have considered this science fair project without direct influence from me? Absolutely not. And that, folks, is the point of this little story. With the notable exception of vocational-technical high schools, public education has all but abandoned any concerted effort to provide youngsters with the hands-on experiences they need to learn how truly fulfilling it can be to create something from nothing using raw materials and their own wits. Similarly, a generation that’s growing up in a microprocessor-driven, throwaway culture has little chance to develop the critical thinking skills necessary to becoming a mechanic, electrician, HVAC technician or carpenter. But here’s the thing: Parents have always been their children’s first and foremost educators. So, when presented with an opportunity to spark that interest in your budding craftsman or craftswoman, make the most of it.