Add to that list Car Mechanic Simulator, a game first published in 2014, with yearly versions released since on Windows, Xbox, PlayStation, Nintendo Switch, iOS, and Android. This one raises the question: how accurate is this game to being a real mechanic?

Curious to find out, I bought the latest version of the game (Car Mechanic Simulator 2021) for my PS4 and decided to give it a whirl. Even though I’m not a major gearhead, it’s obvious real shops have it a lot harder than this game makes it out to be. Below are seven major things that will make you roll your eyes in Car Mechanic Simulator.

1. You instantly get a shop

When you first launch the game, you get a tutorial to learn the basics. It’s rather light: you change oil, balance tires, replace shock absorbers and that’s pretty much it. That’s good for those anxious to get into the action, but the game does suffer a bit from a lack of explanation, leaving you to figure things out through trial and error.

Once you complete the tutorial, you’re given your own shop on “Route 66” somewhere in the southwestern United States, 4,000 “credits” (the in-game currency) and you’re off! Wouldn’t it be nice if this were all it took to open your own shop? Of course, it takes years, maybe decades of hard work, training, and planning to not only learn car repair but also build your own business. 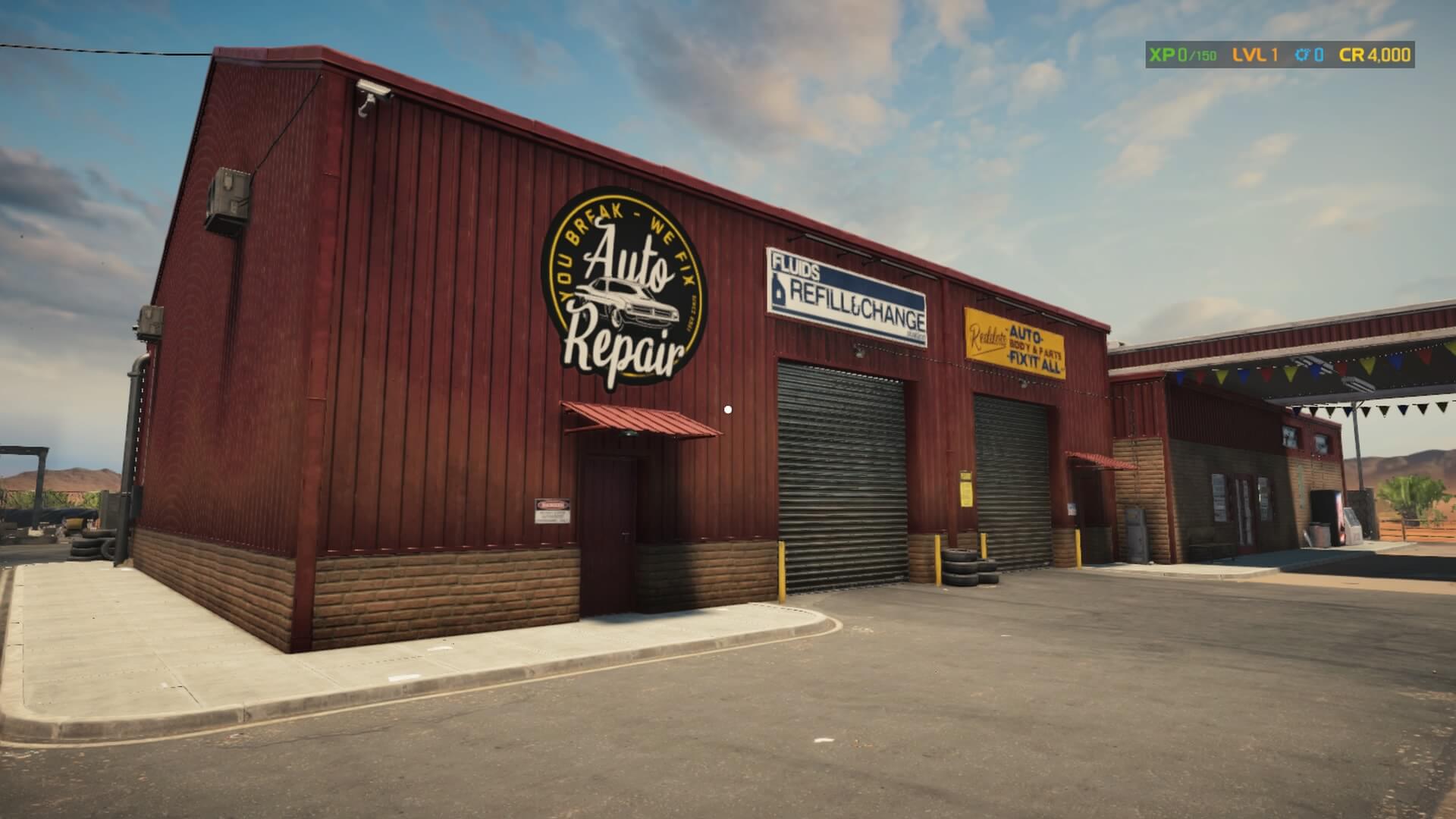 2. Diagnostics comes down to a number

Once you’re in your new shop, you can start taking jobs over the shop phone or through the default menu. Early on, you’re given a list of tasks from the customer that need to be completed with each job. As you progress, you’re given jobs that just describe general failure modes with the vehicle, and you must diagnose what needs to be fixed. You can do this by “examining” the car (a mode where you quickly scan all visible parts) or you can just start taking parts off from the failed system and fire the parts cannon at it until you find the culprit. Later, you can unlock tools that will help you diagnose problems.

Obviously, the realism here suffers a bit, as a magical percentage showing you the quality of a part doesn’t just pop up in a real garage. In addition, rust appears on parts that are bad, with the amount of rust corresponding to how bad the part is. Now, while rust may be a good indicator of failed parts in a real garage, it’s not always as simple as “more rust equals worse part.” 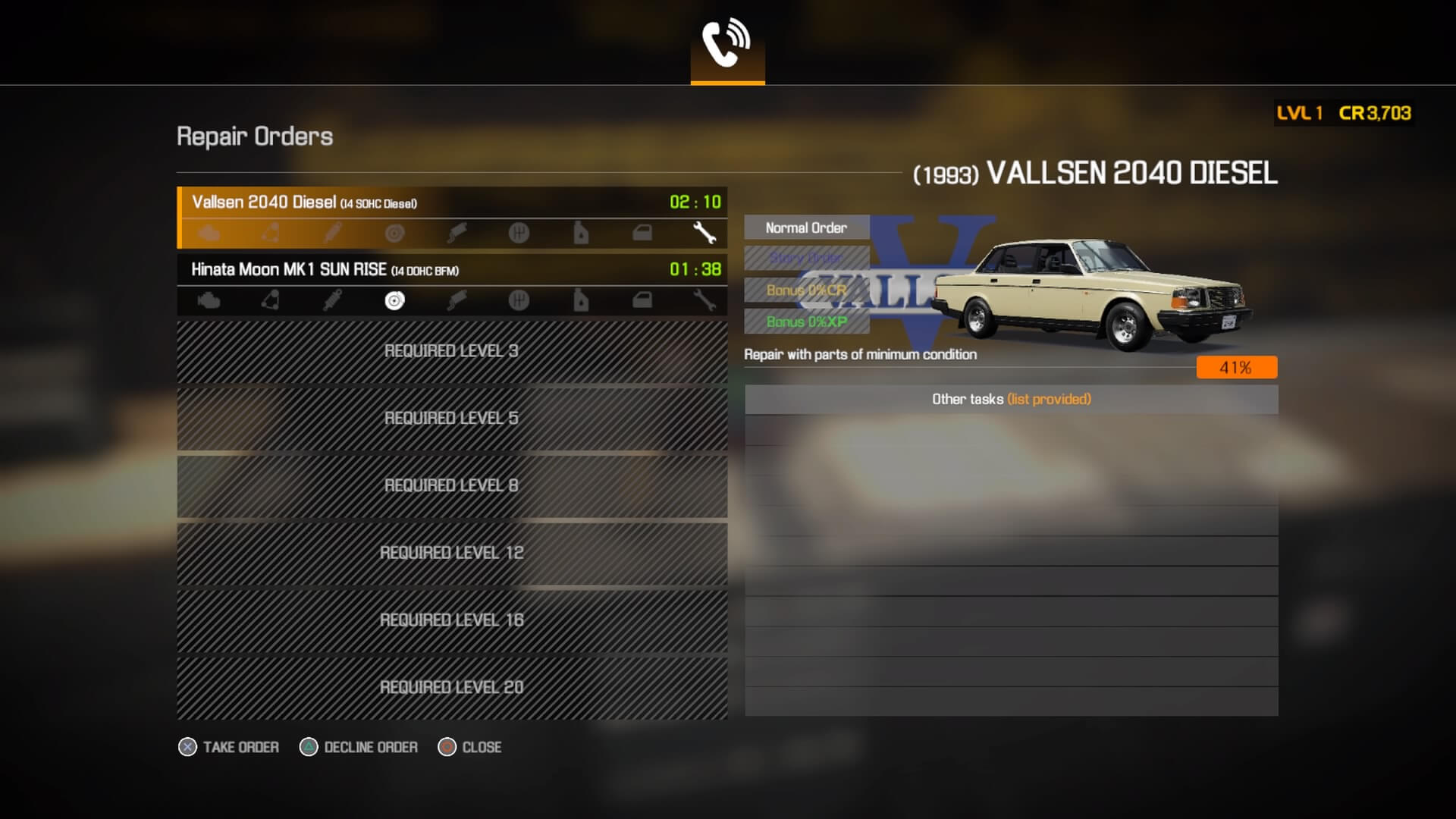 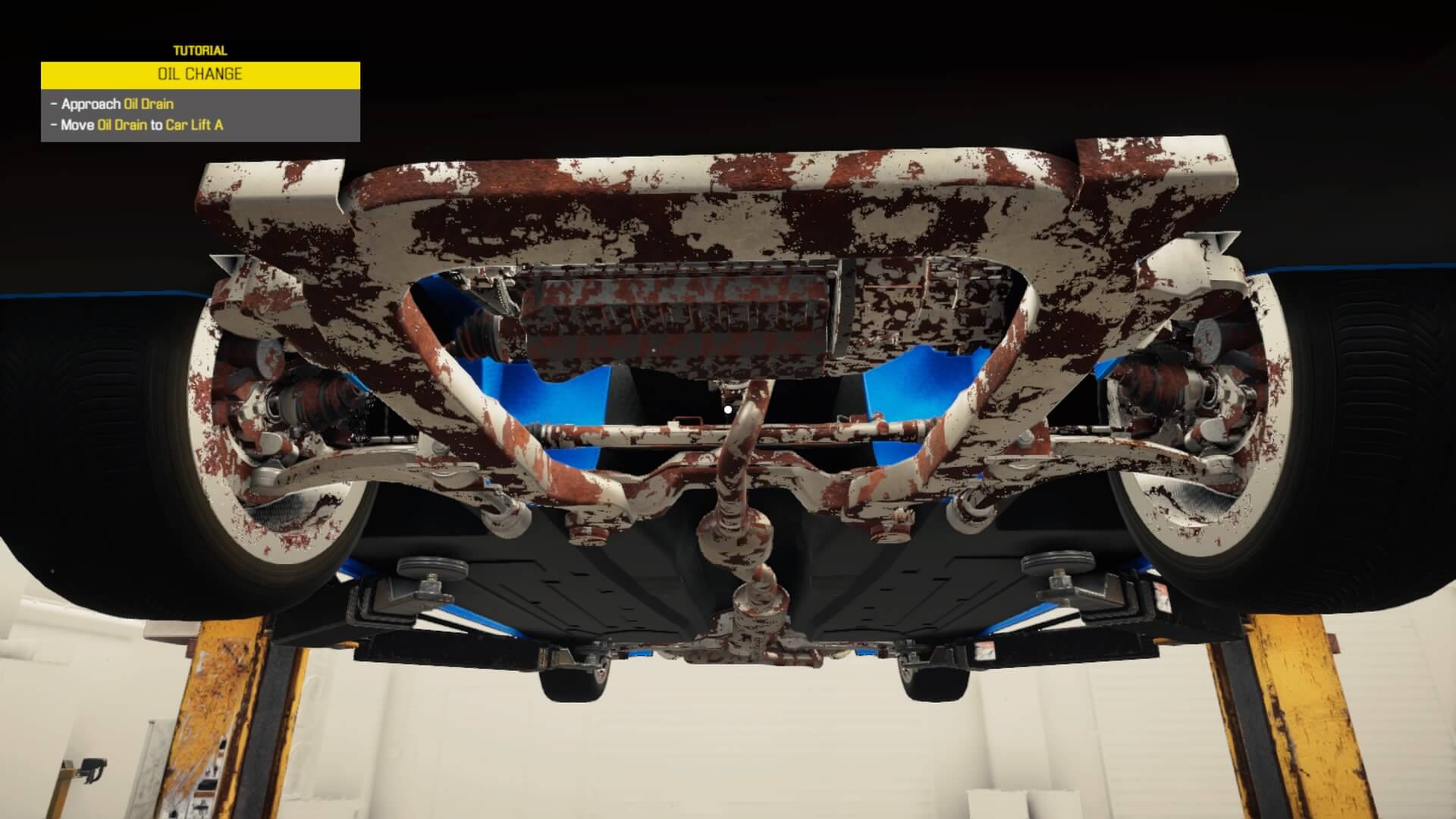 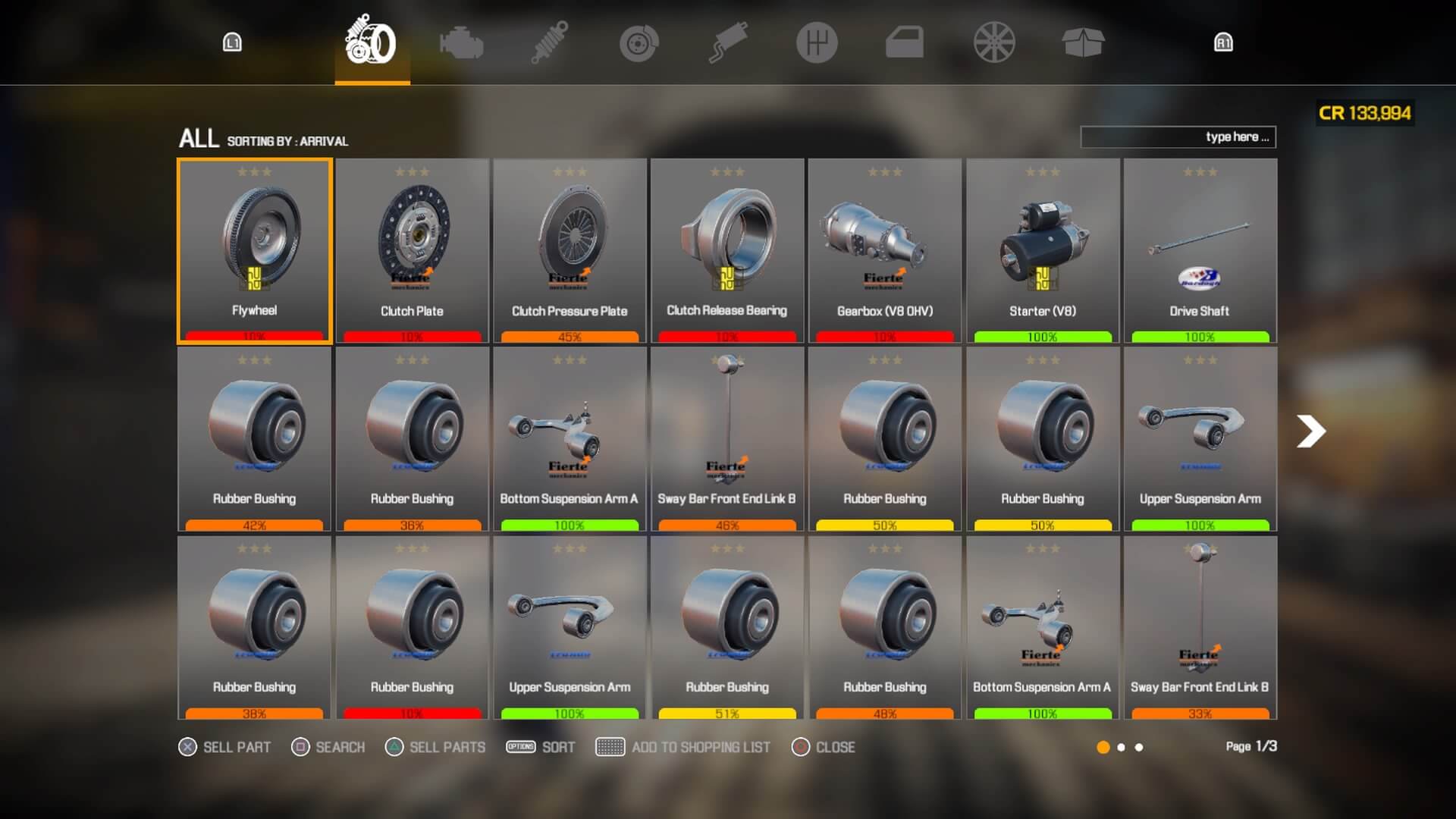 3. The right tool is always handy

In your new shop, you’re given the bare minimum of tools to work with at the start: an oil drain, a tire mounting machine, a wheel balancer and a fluid drain tool. All screw and bolt removal is done with an invisible wrench, screw gun or screwdriver. The realism of the game suffers here a bit, too, as it automatically gives you the correct size wrench or screwdriver for whatever needs to be removed, eliminating the search for the proper size tool. No searching for that elusive 10mm socket!

The game does throw stuck bolts at you now and then, but they loosen right up after spraying a little WD-40 on them. No fighting with a stuck bolt or screw for an hour here! 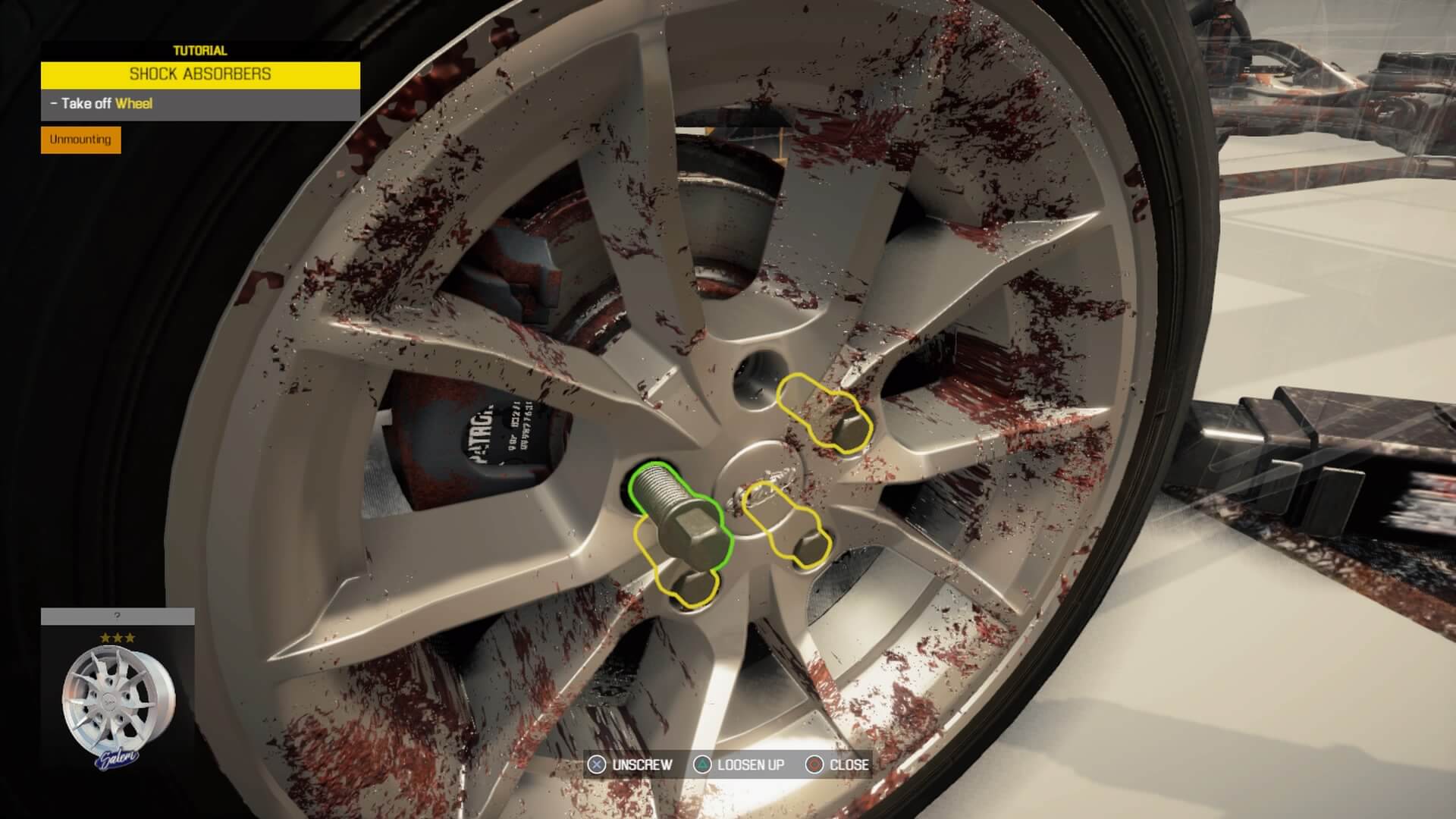 When you are topping off fluids, the game doesn’t recognize the task as being completed until the fluid reservoir is full or overflowing. Obviously, it’s not good practice in real life to fill your oil to overflowing, but as far as the game is concerned, that’s how it’s done.

First of all, who has 11 suppliers? Second of all, what the hell is a body tuning shop? And if you have a shop in Sticksville, West Virginia, or some other remote place, you’re lucky to have a parts store 26 miles away and a distributor that delivers on Tuesdays and Thursdays. On top of that, the parts magically appear in your inventory as soon as you order them. No waiting days for an out-of-stock or backordered part to be delivered! 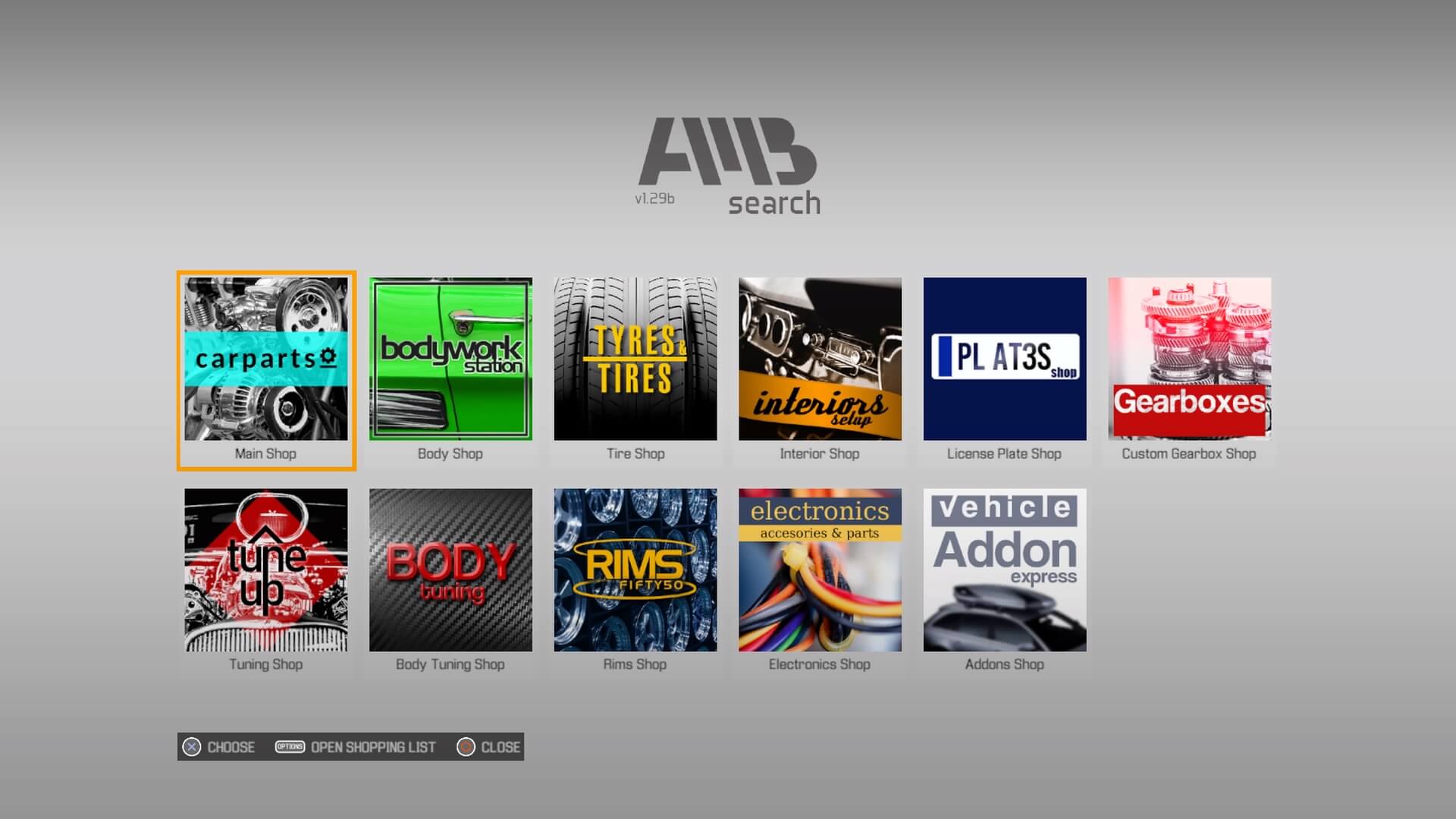 The vendors you can order parts from Screenshot: Red Dot Games / Shop Press

7. Performance comes down to a number

The tuning and dyno part of the game was another aspect that bothered me, both for its inaccuracy and for its poor execution. When an order comes in for a vehicle that needs tuning, the request states that you must increase tuning by a certain percentage range (for example, 9-14%).

First, this is not the way someone would request performance tuning on their vehicle. Second, it’s not clear whether this means both horsepower and torque need to be increased to that range separately, or a combination of both HP and torque needs to be increased to that range. To try to fulfill that request, you have to run the vehicle on the dyno, throw some performance parts at it, run it on the dyno again to see if you’ve made the range, and repeat the process until you’ve satisfied the customer. This is an aspect of the game that could be cleaned up for both the sake of accuracy and for the sake of gameplay.

So, will it teach you to be a mechanic?

The most precise aspect of the game is the location and accuracy of parts on the vehicle. Even though the game uses fake vehicle makes and models, the parts on the vehicle are accurate to where they would be on real vehicles, and in relation to other parts on the vehicles. This is true whether you’re working on a 1970 V-8 or a 2018 electric car. That’s because every car in the game has a real-life equivalent that it relates to.

For example, the Vallsen 2040 is a Volvo 240 and the Hinata Moon MK1 is a Mitsubishi Eclipse. In addition, downloadable content (DLC) is available for the game that allows you to work on real cars: so far, you can buy DLC to work on actual Pagani, Porsche, Jaguar, and Nissan vehicles. One way that this aspect could be improved upon further as a learning tool for the player would be to add a description to the name of each part that tells the player what each part does.

The most fun part of the game for me was visiting the barn or junkyard, finding a junker and renovating it to its former glory (or as close to it as you feel like). My first junker purchase was a 1970 Edgewood Hellcat (a.k.a. a 1970 Oldsmobile Cutlass Supreme). I decided to replace any part that was orange or red (i.e., less than 50% quality). This turned out to be a rather expensive proposition, and I ran low on money while renovating the Hellcat. I took on other jobs to make the money to finish renovating the Hellcat, but then had to buy parts for those other jobs, requiring me to sell new parts I had already bought for the Hellcat to get back in the black (I did make a profit of 23,496 credits on the Hellcat, so it worked out nicely in the end).

Otherwise, I had no problems with the in-game economy; the 4,000 credits you start off with is plenty for you to build upon through the game (unless you make some really bad decisions). As such, this led me to think about one addition I would like to see to the game: having to compete with other shops on price, quality, and speed of completing jobs. 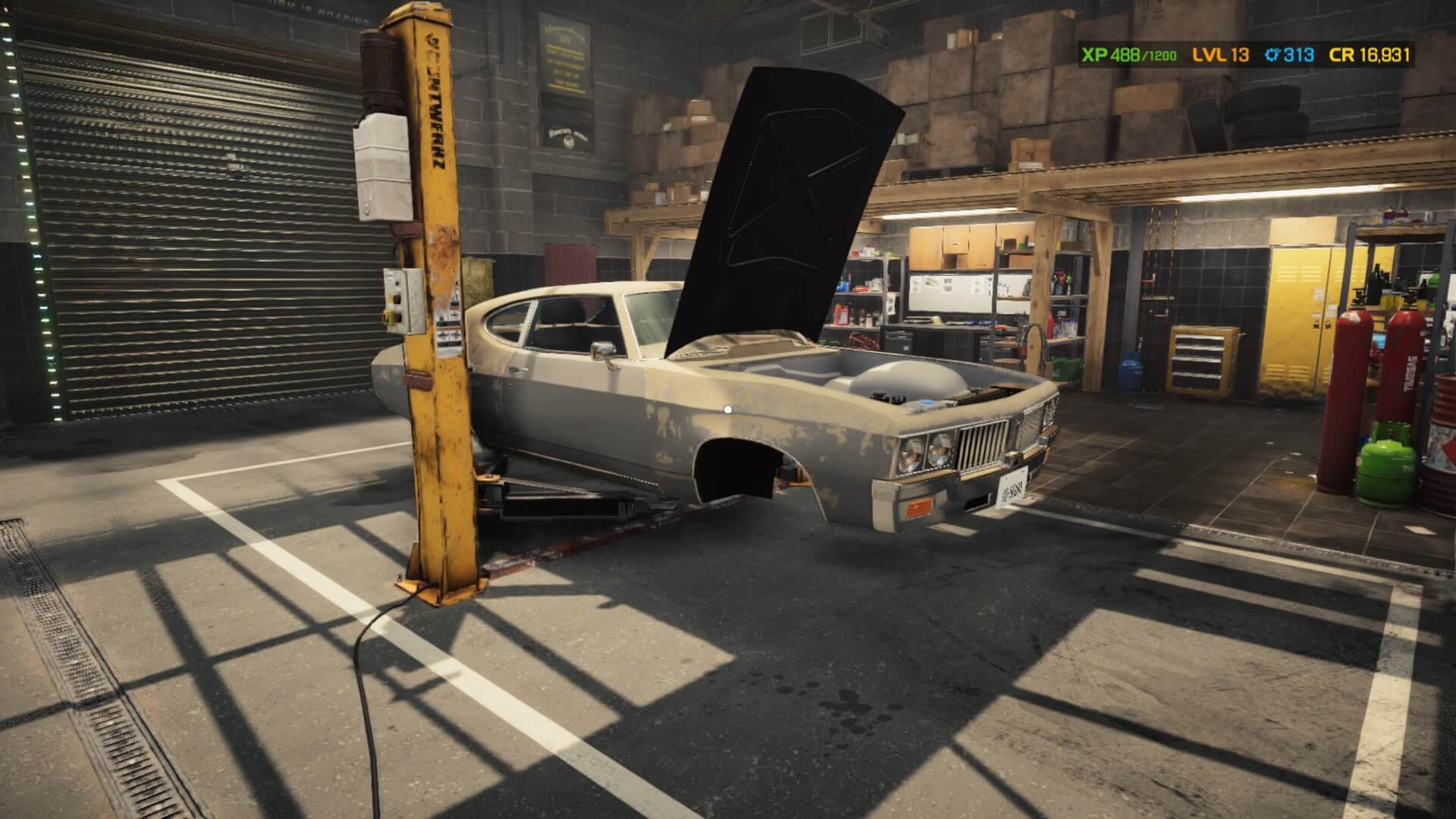 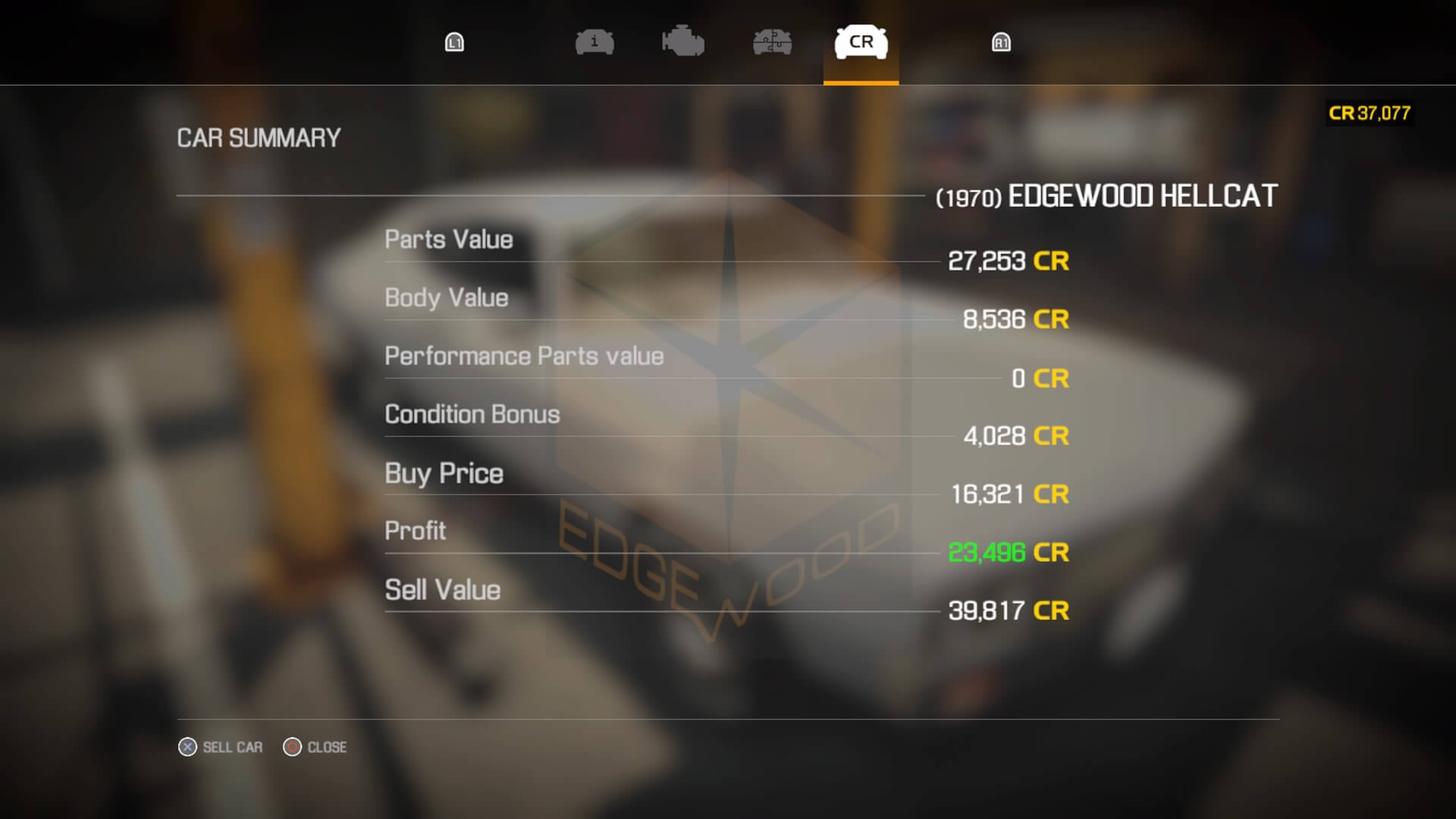 Overall, there are certainly differences between the video game and being a “car mechanic” in real life, as evidenced by the discrepancies mentioned above, as well as others. This is just a video game, after all.

So, what is Car Mechanic Simulator good for? Well, it is fun. Getting a junker and fixing it up is the best part of the game, but it’s also fun just to get in a rhythm of taking jobs, diagnosing problems, fixing them, and turning out jobs. For someone who knows nothing about cars, this game is a good tool for to gain a better understanding of what it means to fix cars, specifically in learning where parts are, what other parts are that they interact with and what various tools are used for that are associated with fixing cars.

In this way, it could be quite useful for a child who is handy and has an interest in fixing cars, someone who doesn’t have access to a garage with two lifters and all the tools necessary, or even someone who has just started tech school and wants to learn some things before they mess up real cars. Or it might just be good for those who have the winter blues! Obviously, someone with no knowledge of cars couldn’t jump from this game to opening their own shop, but in many ways, it could be a good starting point.